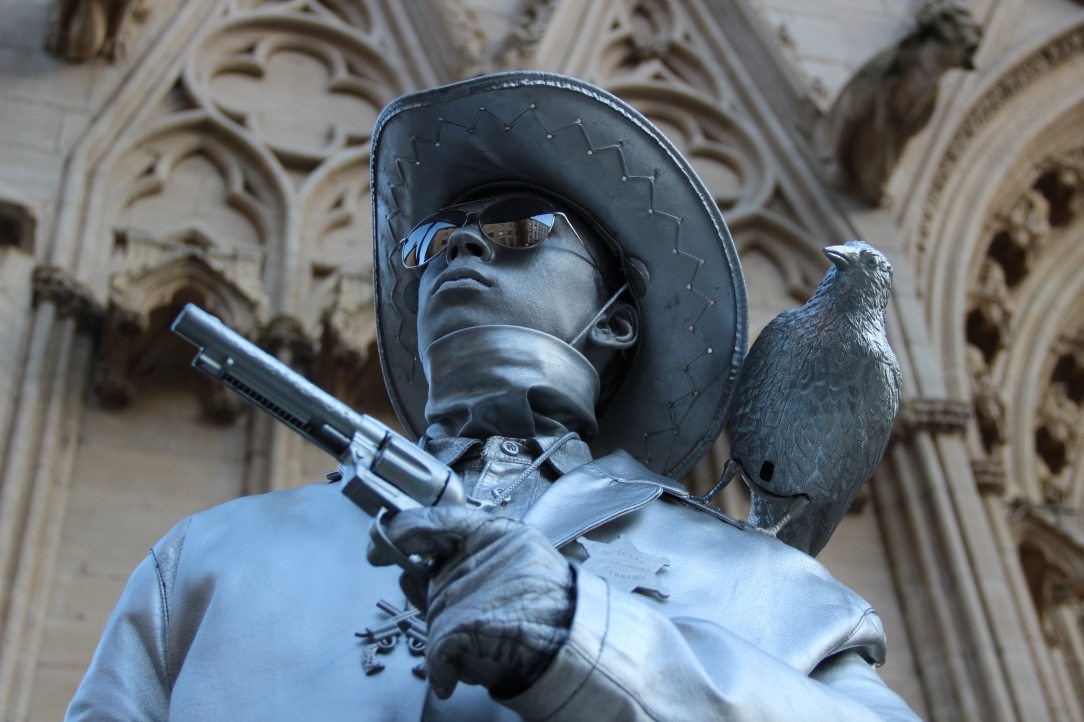 Long gone are the days of the American Wild West. As the Frontier slowly began to shift from being a solid westward line to encircling the arid region between California and the Rockies, the area within was known as a fabled land full of lonesome ranchers, spurred outlaws, saloons, and remote single-road towns rife with all sorts of carnal pleasures. Drinking, gambling, riding, looting, and shooting seemed to be the preferred pastimes in an era that is no doubt romanticized a tad in spaghetti westerns and historical dramas of today. Needless to say, the culture and style of the Wild West has become so engrained in the American canon that we’ve become incredibly familiar with the typical dress of a cowboy; if you’re anything like me, you most likely imagine a very handsome man with stubble and a tanned, weatherbeaten face, strong arms, and who walks with an intoxicating swagger as though he’s the lord of these painted red canyons, his gait always preceded by a chorus of jangling spurs… I’m sorry, where was I? Oh, right. Cowboy clothes. Right. Ahem.

There are a few staples of what we consider cowboy garb. We’ve got a button-up shirt (sometimes paired with a vest), trousers, Cuban heel riding boots, a big-buckle belt, a bandana to protect the face from the elements, and all crowned by the iconic cowboy hat, of course. Now, unless you’ve either visited Westworld or you’re a host at the park — and if it’s the latter, this article shouldn’t look like anything to you — you probably don’t see anyone dress like this anymore. Today, what was originally considered western fashion has been supplanted by the more casual style now common across much of the southern United States, from Nevada to Tennessee. Traditional western attire has shifted from the rough and roguish cowboy ensemble of old to snap-fastened shirts with elaborate stitching and piping as well as horrible boot-cut white stitched denim. Shudder.

Essentially, the few things that have carried over from the dress of yesteryear include Cuban heel boots, hats, bolo ties, bandanas, and fringe (oh, how I love fringe!). Even with that being said, you’d be incredibly hard-pressed to find anyone dressed in like manner outside of the broad southern sweep of the United States. Heck, these cowboy boots ain’t made for walkin’ on New York City pavement… That is, until now.

For whatever reason why, there seems to be a growing fascination and fixation on the trappings of Western style. From discount clothing bins to the most premier fashion houses of the world, we see more and more clothes that derive inspiration from the time of Cowboys vs. Indians (and please don’t say Indians). Perhaps because it’s the most acceptable styling, being less likely to attract judgmental looks and having already made a famous comeback in the 70’s, fringe can easily be considered the fanfare of trumpets duly announcing the arriving procession of the rest of its Western family. Typically adorning shirts and jackets, fringe made its popular debut long ago in the American Southwest and Rocky Mountains, first worn by Native Americans and then the frontiersmen who engaged with them. Believe it or not, fringe served an actual purpose rather than just to look fashionable — when added onto a warm buckskin coat, the fringe could act as a moisture-wicking element. Buckskin jackets outfitted with fringe soon became all the rage, perfect for braving those cold desert nights; a number of America’s most famous Westerners were particularly fond of fringe, such as Davy Crockett, Calamity Jane, and Sitting Bull. It brings me great pleasure to see such an iconic product of Americana once again on the rise. The luxury brand that needs no introduction, Gucci, has been at the forefront of this movement for quite some time, producing everything from more out-there leather jackets with colorful fringing to more understated handbags with a simple fringed tassel fixed to the zipper. Since these institutions hold great sway over what trickles down from department stores to outlet fashion establishments, as Miranda Priestly would be delighted to inform you, it’s truly only a matter of time before we see it more and more outside — and inside — of the contained fashion bubble of the southern states.

Now, you might be scratching your head at the implication that cowboy hats will become popular in mainstream fashion. Truthfully, as much as I would love this, I don’t see it happening; they’re too big of a statement piece and, for the time being, much too closely associated with either the southern states or costume, either of which may attract unwanted stares in other parts of the country and world. Fortunately, we are not wanton for wide-brimmed hats. What has been becoming more popular are wide-brimmed fedoras and rancher hats, which are worn by many to give off a more subtle Western flair without fully leaning into the “yeehaw of it all”. People are certainly taking their liberties with it, too; rather than the common black, brown, and beige tones, more untraditional colors and ribbon designs are finding increased appreciation among millennials in particular. One of my personal favorite outlets for these more unorthodox hats is the Australian label Lack of Color, specializing in hat design and with wide-brimmed hats to boot. If you’re becoming more inspired to experiment with Western wear but you’re not very fond of the idea of investing in a cowboy hat, this is the place to go.

To top it all off, we’ve got the boot. Similar to fringe, cowboy boots, often identified by their stacked Cuban heel and flashy designs on the shaft, have become the subject of growing interest among a wider demographic. Just as Gucci has dominated the fringe game, Italian label Valentino has leaned in deep to the cowboy boot trend, offering a vast array of high-quality leather boots with eye-grabbing designs. However, many of these boots aren’t the full-height ones with shafts that rise up the majority of the calf; a decent amount of them have been reimagined as cropped ankle boots. If a pair of traditional ones are more your thing, I’d suggest Boot Barn, a chain store pervasive across much of the U.S. but relatively obscure in regions such as the Northeast and Midwest. Boot Barn wields an absolutely immense collection of cowboy boots in any design you can possibly imagine — my personal favorite pair of boots, being slick black with a reddish sheen, was purchased at a Boot Barn in Nashville. Although cowboy boots are a big fashion trend I can definitely see coming in the future, for now, we’ve only seen baby steps in that direction, with huge online retailers such as ASOS outputting more pairs of boots fitted with the high Cuban heel so characteristic of cowboy riding boots. It’s really only a matter of time!

Trying to dress Western is a careful dance between looking costume-y, looking hokey, and actually looking good. Luckily, as this style slowly worms its way into the mainstream, the gauge for what becomes considered gauche lessens and you become more able to do as you please. That’s the spirit of the Wild West, after all — cowboys weren’t so much concerned with what people thought of them as much as they were with herding livestock, chasing bounties, wrestling with outlaws, or, you know, being outlaws. There’s a certain rogue playfulness about the whole era, for better or worse, which is an attitude that I believe we should all maintain when it comes to how we dress and present ourselves. Perhaps the most important fruit plucked from the dusty, knotted tree jutting from some crack overlooking a canyon isn’t any sort of hat, nor fringe, nor boot. Perhaps the most important thing passed on from the enduring legacy of the Wild West is that it was, indeed, wild; if we adopt this same renegade mindset when it comes to the clothes on our back, there’s really no telling what kind of legacy we’ll be able to pass on to the future.

So, I say to you, yeehaw, and with a tip of my hat and crack of my whip, I ride my horse into the sunset.

View all posts by Andy

Here at Estilavida, we’re committed to helping you look – and feel – your absolute best. Need some input on an outfit or tips on how to add that extra umph?  Consult our experts and get same-day responses by filling out our form here.